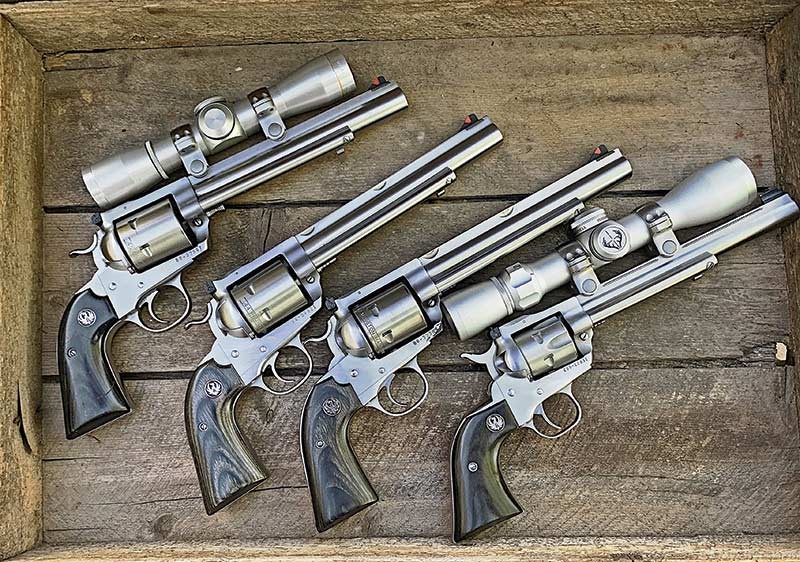 Tank’s trio of Bisley Hunter’s chambered in, from top: .41 Magnum, .44 Magnum and .45 Colt. The Bisley Hunter is a wonderfully versatile SA shooter regardless of caliber. Ruger never made a Bisley Hunter in .22LR/Magnum, so Tank made do with the scoped Hunter, with plow handle grip. The Scope mounting makes these revolvers versatile indeed.

Sitting near the ridge top, I see her nervously step out from the quakes. My left thumb cocks the Bisley Hunter before gripping the walking stick with that hand. I place my right hand on top, for support. Feeling stable, I transition to the sight picture, testing the hold. She’s far, but everything is steady and clear — perfect — when the gun fires.

Jerking her head, she bites at the slug’s impact, thinking, “That’s one helluva’ horsefly bite!” The “wumpth” sound is reassuring, echoing back to me. Taking three woozy steps, she drops.

“H..o..l..y, hell,” I think, mouth wide open. My first handgun kill, a cow elk, double-lunged at 121 yards! Being in Idaho, land of Elmer, using his bullet design and load, makes it all the more fitting, poetic even

My then-new Ruger Bisley Hunter (BH), chambered in .45 Colt, was christened. Over the next decade, we’ve taken several deer together, all from the same box of handloads. They consist of Lyman’s 454424 .45 Keith bullets, loaded over a stiff dose of Alliant 2400, ignited with large pistol primers, going over 1,200 FPS. It’s a good load for us.

If there was ever a “do anything” gun, Ruger’s BH would be a top contender. While the .44 Magnum BH is a catalog item, the .41 Magnum, and grand old .45 Colt, are available, from time to time, by different distributors. It took a while to get mine.

What separates the BH from others? It’s the beefy, heavily ribbed barrel, allowing scope ring cut-outs, making scope mounting a snap. The added weight absorbs recoil from heavy loads, while also steadying aim, as an added bonus. Shooters appreciate the glare-free qualities provided by the grooves on top of the rib when shooting open sights.

My first BH was chambered in .45 Colt because of its “do-anything” qualities. My favorite caliber, its performance is exceptional with its different power levels. One would be hard-pressed finding a better combination. Over time, I obtained all three BH’s, I love them so much.

A scoped handgun really lets you wring out the accuracy for testing handloads.

After finally obtaining my .45 BH, a .41 Magnum BH became available, and I snatched it up, too. I’ve always liked the .41 Magnum and searched for years before finding any gun chambered in it, new, or used. I didn’t care, I just wanted a .41 Magnum. I’d already bought brass, dies and molds for it — but still needed the gun.

Handloaders have a backwards way of doing things like that. Anyway, when I saw the .41 BH, I knew I had to have it. Having two out of three guns, I completed my quest getting the .44 Magnum BH for Christmas a few years back — from my wife. What an angel! Besides, you can never go wrong with a .44 Magnum, right? Especially when it’s a BH. I know, I’m spoiled, and maybe a little obsessed. Maybe?

The makings for Tank’s favorite .45 Colt Handload — the one he’s relied on many times in the field over the years.

My original plan was using the BH with iron sights, until my eyes fail, then adding a scope. Happily, I can still see my front sights good enough for deer-sized targets, out to 75 yards, or so. I still prefer irons, as they provide more confidence, simply because I don’t see my wobble as much. Hey, we all have it to some extent. However, nothing’s worse than watching magnified crosshairs dance around during your trigger press — at least for me.

Shooting from sandbag rests remedies any wobble and is perfect for checking accuracy of new handloads. I never realized how accurate my Bisley Hunters were, until scoping them. I swap the same Leupold 4X scope, rotating it from gun to gun, as needed.

My preference for a single action sixgun is a no brainer. They’re tough, reliable, easy to work on and have a strength and beauty all their own. It’s hard to beat those traits. They’re appropriate for the rough and rugged terrain we hunt. The Bisley grip absorbs recoil like no other. Say goodbye to bashed knuckles with heavy handloads.

Yup, my .45 Colt Bisley Hunter and me have a lot more hunts to go on. I never tire watching how effectively it performs. It has never let me down. Unfortunately, I can’t say the same, and that’s another story. But, if you’re looking for a “do-anything” shooter, the Ruger Bisley Hunter is hard to beat.