The Browning Hi Power: The Superlative WWII Combat Handgun That Played Both Sides


In the late 1960’s and early 1970’s, much of Africa burned. Sundry populist uprisings supported by distant communist benefactors strived to nip at the forces and institutions of the European colonial powers long enough to draw blood. With small arms, mortars, and artillery of predominantly Russian and Chinese origin, guerrilla fighters in places like the Congo and Mozambique engaged in pitiless unconventional warfare that saw widespread atrocities.

European colonial powers like Belgium and Portugal fought to defend their interests, but the rebels had little to lose and everything to gain. In the chaotic maelstrom that swallowed up untold treasure and an entire generation of people, soldiers of fortune found employment opportunities on a previously unprecedented scale. In a veritable ocean of blood, one otherwise trivial engagement gained lasting notoriety. 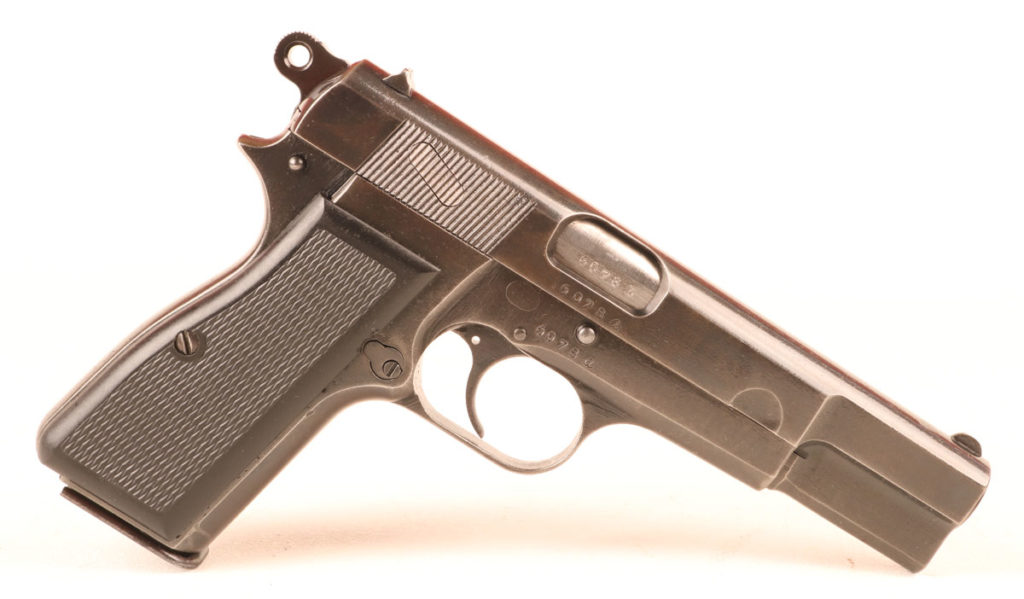 Guns produced in occupied Belgium for use by the Germans were festooned with waffenamt acceptance marks and designated the Pistole 640(b). The “b” stands for “Belgium.” The Waffen SS and Fallschirmjagers consumed most of these guns. 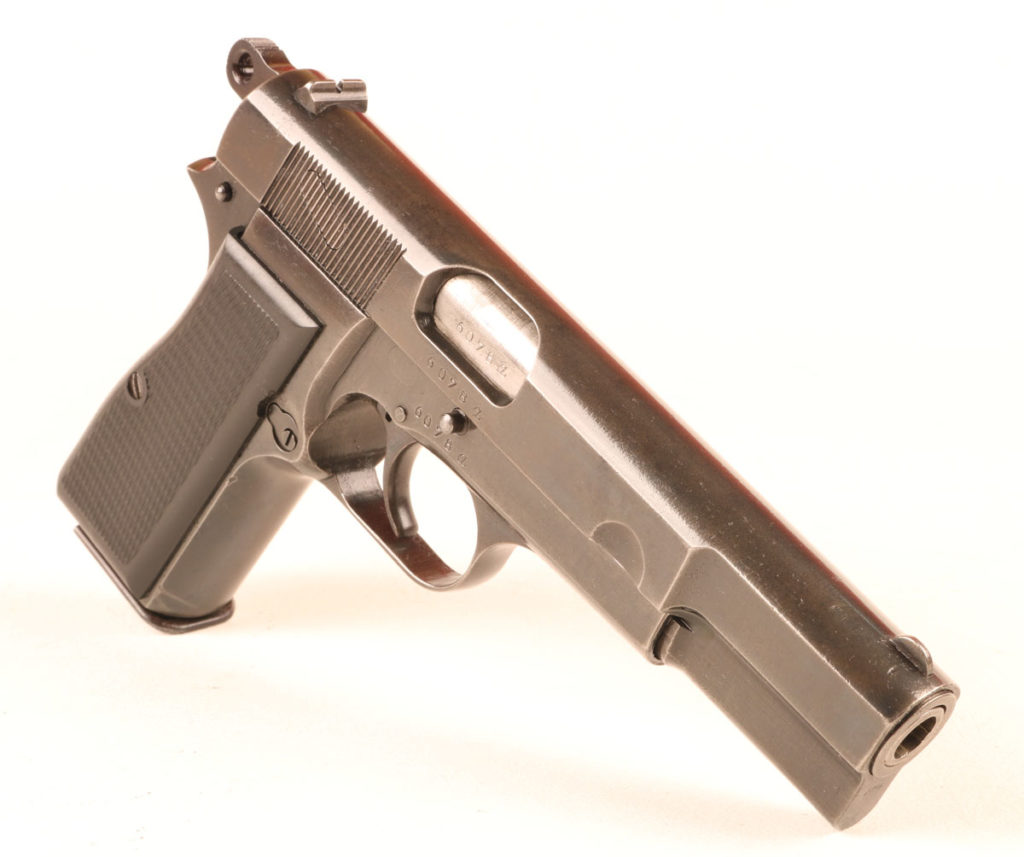 Mike Rousseau was a white Rhodesian mercenary engaged in combat against FRELIMO guerillas in and around the Mozambique capital of Maputo. FRELIMO was the dominant political party in Mozambique fighting for independence from Portugal. FRELIMO’s Marxist underpinnings earned it support from Russia and China. Portugal had ruled Mozambique for four hundred years, had subsequent deep roots in the country, and was not leaving without a fight.

Rousseau and his mates were in action clearing the airport in what was then known as Lourenco Marques, the Maputo appellation came later. Most of the mercenary soldiers carried FN FAL or HK G3 rifles. However, for reasons lost to history Rousseau was reduced to his sidearm, a GP35 Browning Hi-Power in 9mm.

Rounding a corner Rousseau found himself unexpectedly face to face with a FRELIMO guerilla armed with an AK47 at a range of about ten paces. Mike Rousseau was a trained soldier so he instinctively presented his handgun and shot the guerilla twice in the chest, launching both rounds in quick succession. The young African not only failed to fall, but he advanced toward Rousseau with murderous intent. Taken aback by the failure of his double tap to stop the threat, Rousseau took a moment, leveled his pistol at the charging man’s face, and fired a third round. This bullet struck a bit low, entering the man’s neck and severing his spinal cord, effectively ending the fight.

Rousseau eventually related the experience to Jeff Cooper, a visionary whose influence is felt on modern tactical training even today. Cooper incorporated the three-shot drill of two to the chest and one to the head into his curriculum at the Gunsite Academy. From there the drill made its way throughout the tactical community as well as into several gun-heavy action movies. The exercise has ever since been known as the Mozambique Drill in honor of its origins that sordid day in the Lourenco Marques Airport in the war-torn capital of Mozambique.

John Inglis and Company of Toronto, Canada, began producing Hi-Power pistols for use by Commonwealth forces in late 1944. This particular gun was intended for shipment to Nationalist Chinese troops fighting the Japanese but was ultimately diverted. 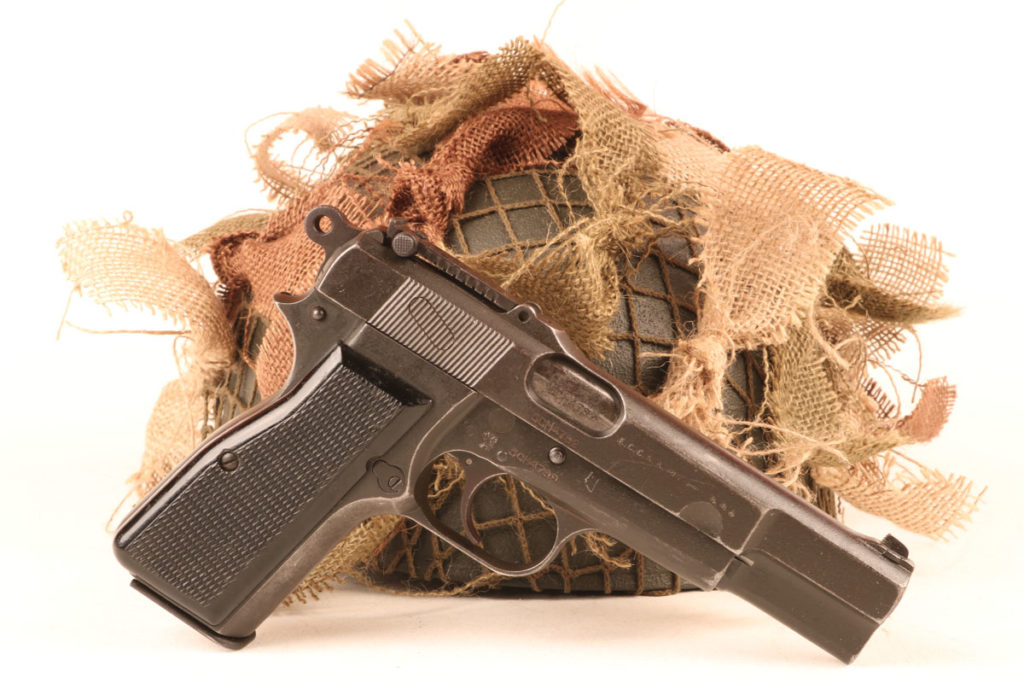 The pistol that Mike Rousseau used in the airport that day was a collaborative effort of two of the world’s greatest gun designers. John Moses Browning began the project but died in 1926 before it was completed. Dieudonne Saive completed work on the gun in 1935. Browning was the most prolific gun designer in human history, holding 128 patents at the time of his death. Saive went on to design the FN FAL rifle as well. 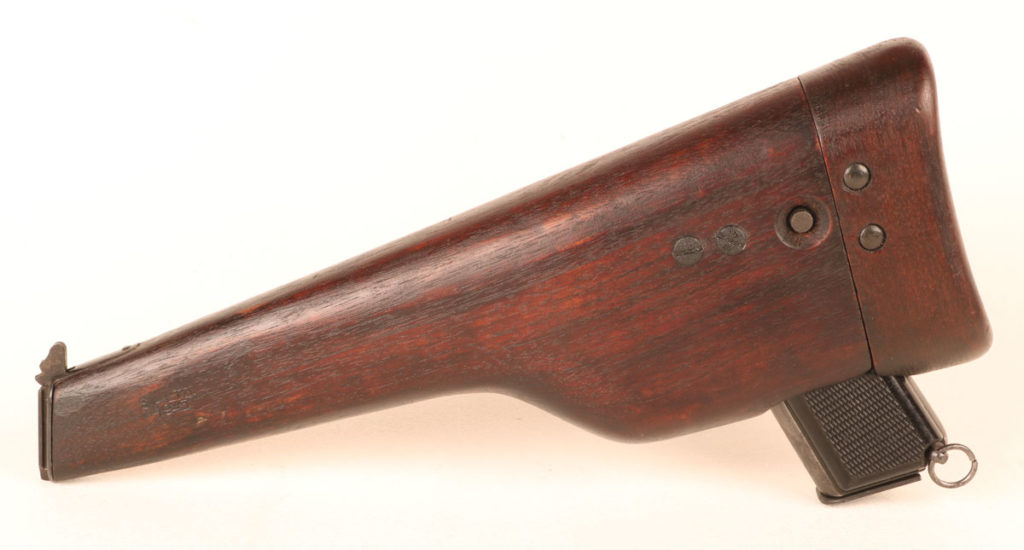 The most common detachable shoulder stock issued with Hi-Power pistols doubled as a holster. Period guns combined with period stocks do not require NFA registration as short-barreled rifles.

The Hi Power has the dubious distinction of being the only production firearm to see general issue among both Allied and Axis forces during World War II. When the Nazis overran Belgium they converted FN arms production over for use by the German war machine. The Hi Power pistols accepted for German use bear waffenamt acceptance stamps and the designation Pistole 640(b). Most of the German Hi Powers were issued to Waffen SS and Fallschirmjager troops.

As the Wehrmacht closed in on the FN plant in Belgium workers at the facility smuggled the plans for the Hi-Power out of Western Europe and into the UK. From there they made their way to Canada. John Inglis and Company of Toronto then tooled up to produce the gun for use by Commonwealth troops. Production began in late 1944, and the guns were in service in time for Operation Varsity, the airborne assault over the Rhine. 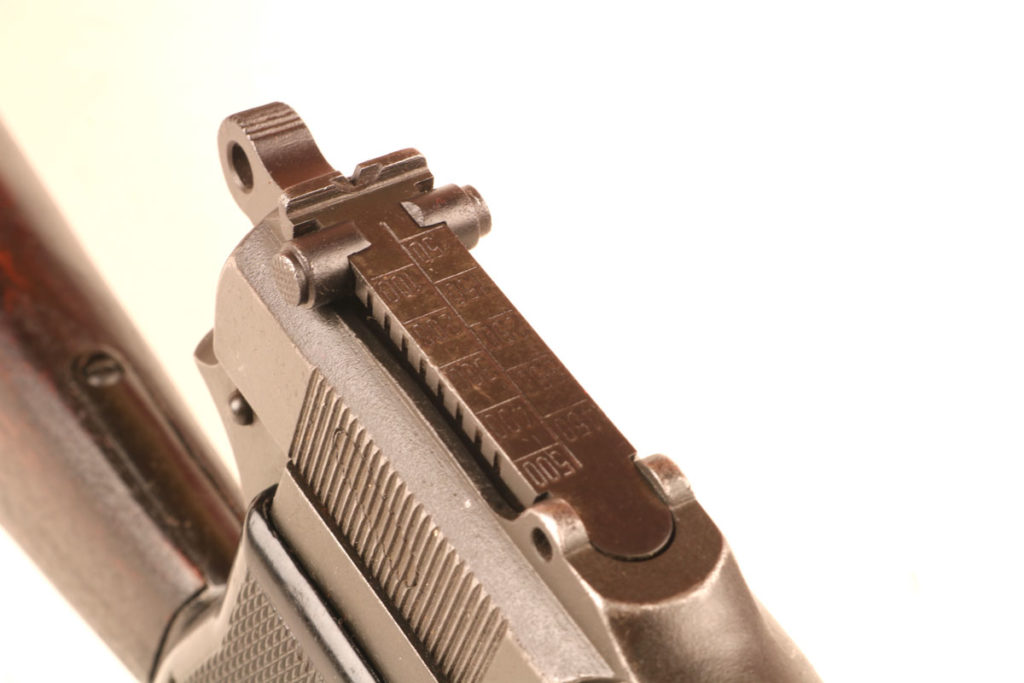 The adjustable rear sight on stocked Hi-Power pistols is calibrated out to five hundred meters, a fairly ludicrous distance for a 9mm handgun.

The Hi-Power carried several designations throughout its long service life to include the P35, GP35, Grand Rendement, Grande Puissance, and High Power. The gun was produced in two broad variants. The simpler of the two sported fixed sights. The more complex had a complicated adjustable rear sight and a slot in the grip to accept a detachable shoulder stock. Some shoulder stocks were of a simple board sort, while the more common incorporated a holster feature and web belt hanger as well. Most of the Inglis guns cut for shoulder stocks were intended for use by the Nationalist Chinese. A great many of these weapons were not delivered in time to see service in Asia and were subsequently absorbed into use elsewhere.

The Hi-Power, shown on the right, was itself an evolutionary development of the 1911 pistol. Employing a simplified locking mechanism and a larger capacity magazine, the Hi-Power has proven to be a remarkably enduring design.

The Hi-Power was an evolutionary development of Browning’s recoil-operated system manifest in the earlier 1911 pistol. Unlike the 1911 the Hi-Power employed a cam system to lock the barrel into the slide rather than a pivoting link. The trigger was single action, as was that of the 1911, but it was not without its problems. Most Hi-Power pistols included a magazine safety that had a deleterious effect on the gun’s trigger pull. This effect can be negated by removing the magazine disconnect parts. German guns did not typically include this feature.

Arguably the most revolutionary aspect of the Hi-Power pistol was its double column, single feed 13-round magazine, a Saive contribution. Modern iterations of this magazine feed almost all of the world’s combat handguns today. This remarkable contrivance initially arose in response to a request from the French military for a pistol with a magazine capacity of at least ten rounds. While the French handgun trials initially shaped the Hi-Power’s design, France ultimately selected the Modele 1935 pistol for their service use. 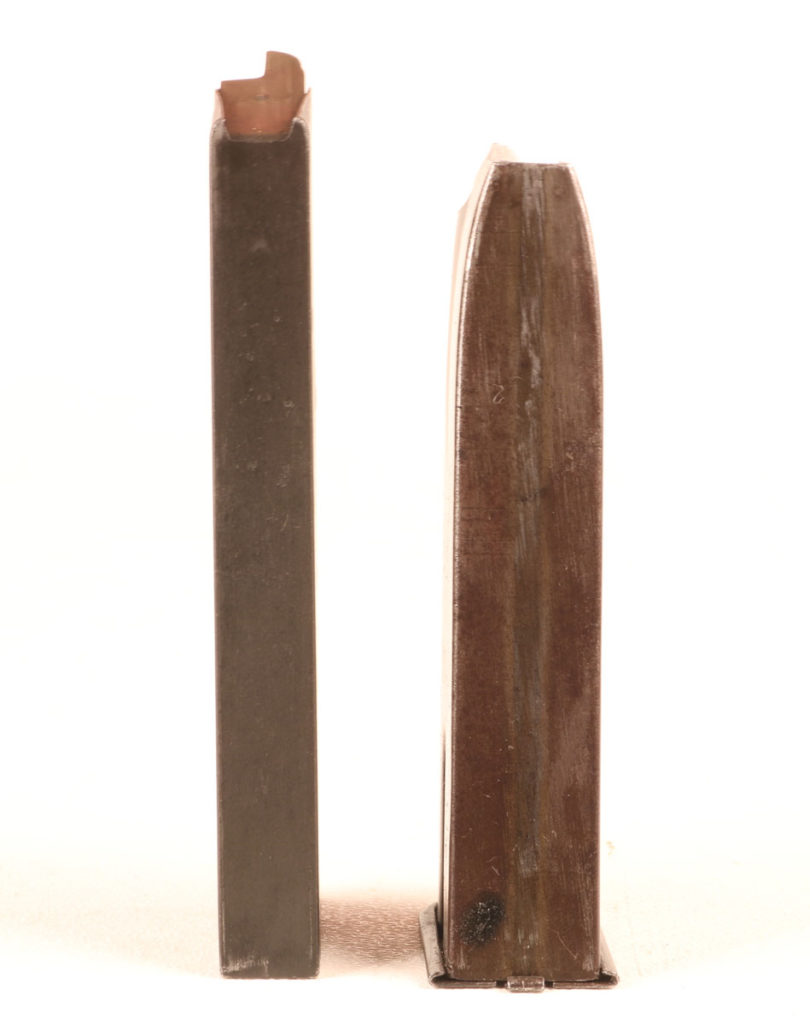 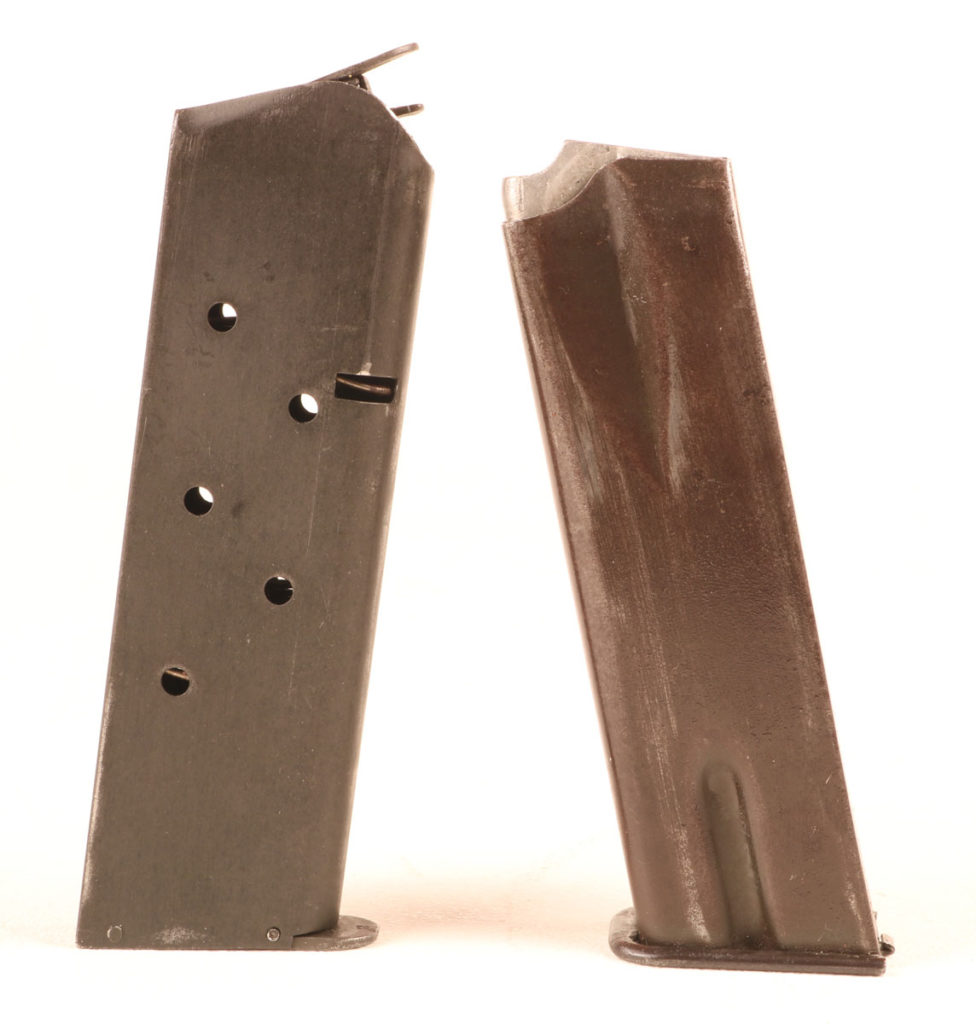 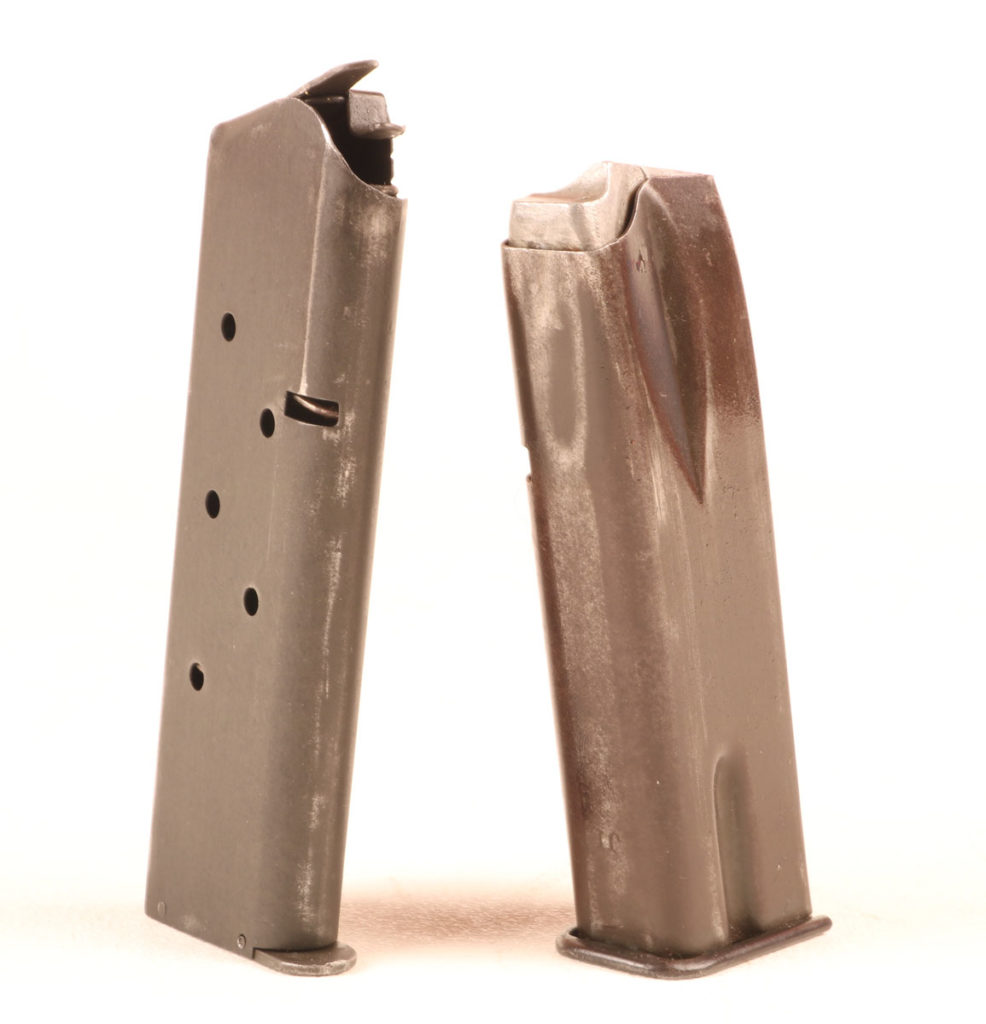 One of the most revolutionary aspects of the Hi-Power design was its double column, single feed 13-round magazine, shown on the left alongside a standard seven-round 1911 magazine. Most of today’s modern combat handguns employ a similar magazine.

We evaluated a pair of wartime Hi-Powers, one produced by FN during the German occupation and the other made by Inglis originally for use by the Chinese. The German gun has fixed sights, while the Canadian version accepts a shoulder stock and includes the adjustable rear sight. The Belgian/German pistol is a thing of beauty and pure joy on the range. The Canadian version is a bit past its prime and rattles slightly when shaken.

The lack of a magazine disconnect on the German gun makes a palpable difference, but both triggers remain quite nice. So long as it is combined with a period original shoulder stock the wartime stocked Hi Power is exempted from the short-barreled rifle restrictions of the National Firearms Act. The shoulder stock on my gun locks up fairly tightly and makes for a nice shooting platform. However, with the stock installed I cannot quite reach the slide release. The rear sight is graduated out to five hundred meters, a fairly ridiculous range for a 9mm handgun round. 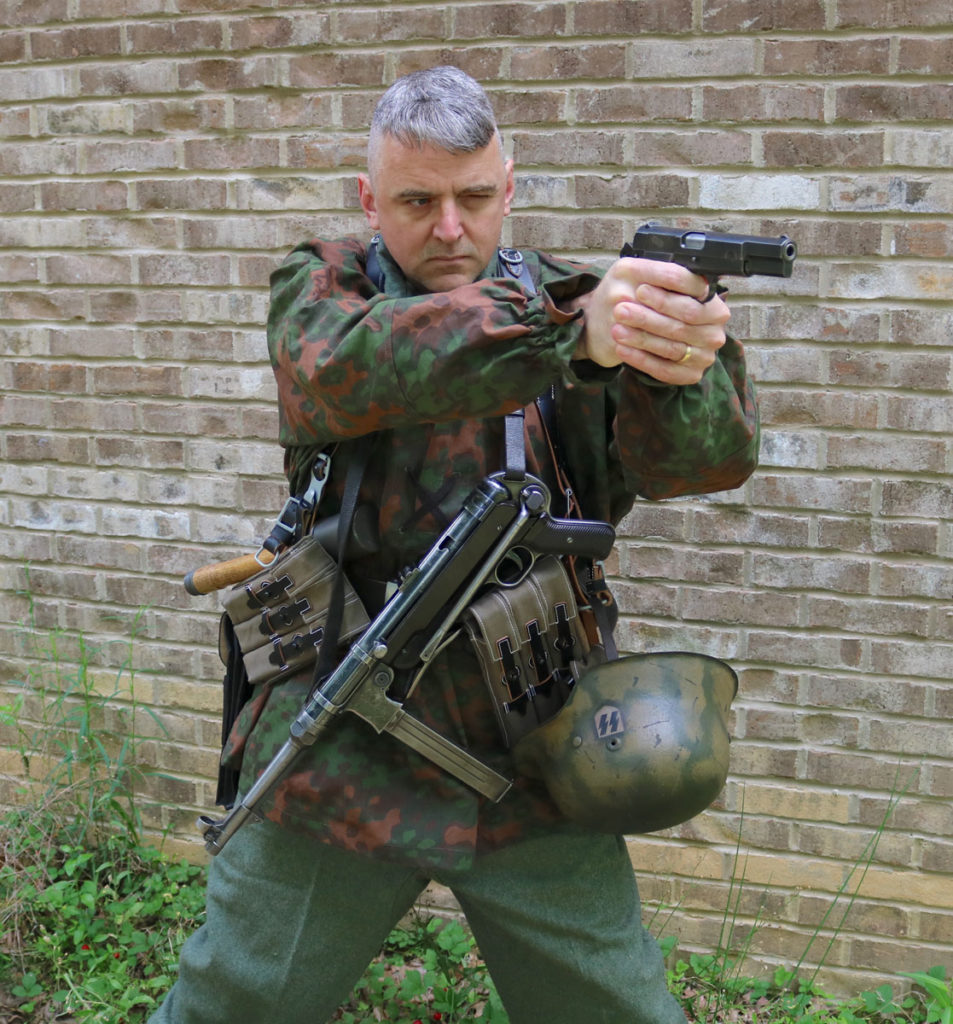 The Hi-Power was a coveted combat handgun among Waffen SS troops who appreciated the weapon’s smooth trigger and impressive capacity. 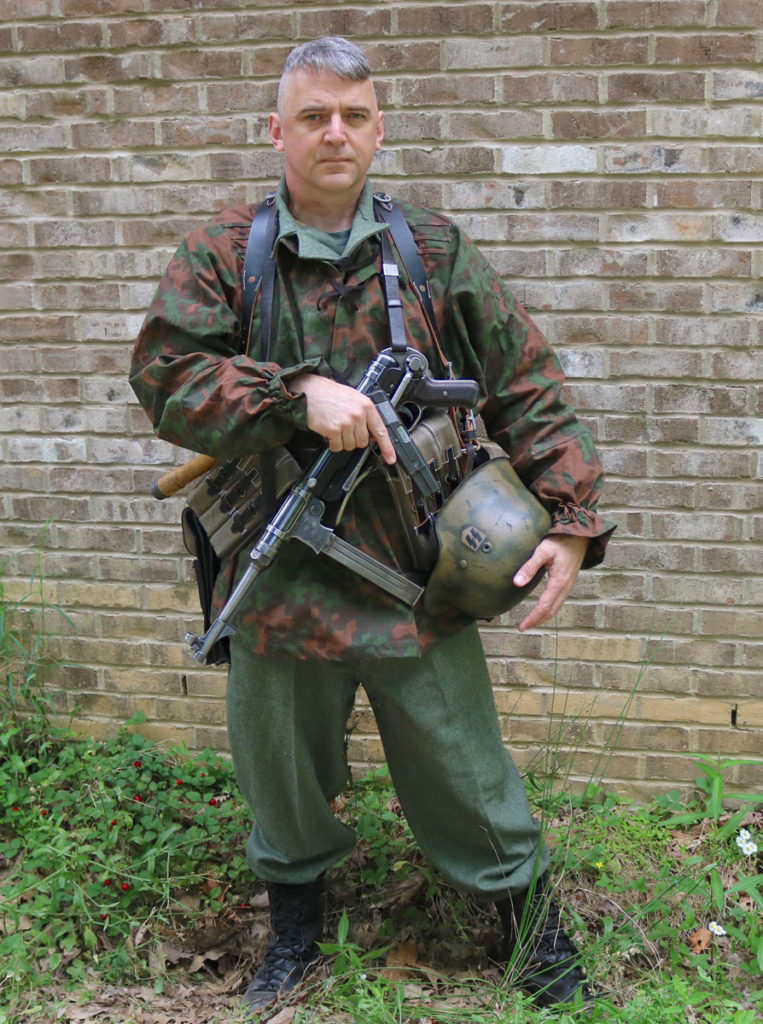 The magazines do not fall free, but both guns run quickly and well. The beavertail is a bit abbreviated, and hammer bite is a legitimate concern as a result. The ringed hammer does not reach back quite as far as the conventional spurred hammer found on most civilian guns, and this minimizes the possibility of pinching the web space of the firing hand.

In my experience, the Hi-Power is the most pleasant combat pistol of the WW2 era on the range. The grip fills the hand nicely, and the single action trigger, even on the Inglis gun, is light years ahead of any domestic German design. I would prefer a 1911 had I need to use a handgun for real, but the Hi-Power would be a close second. 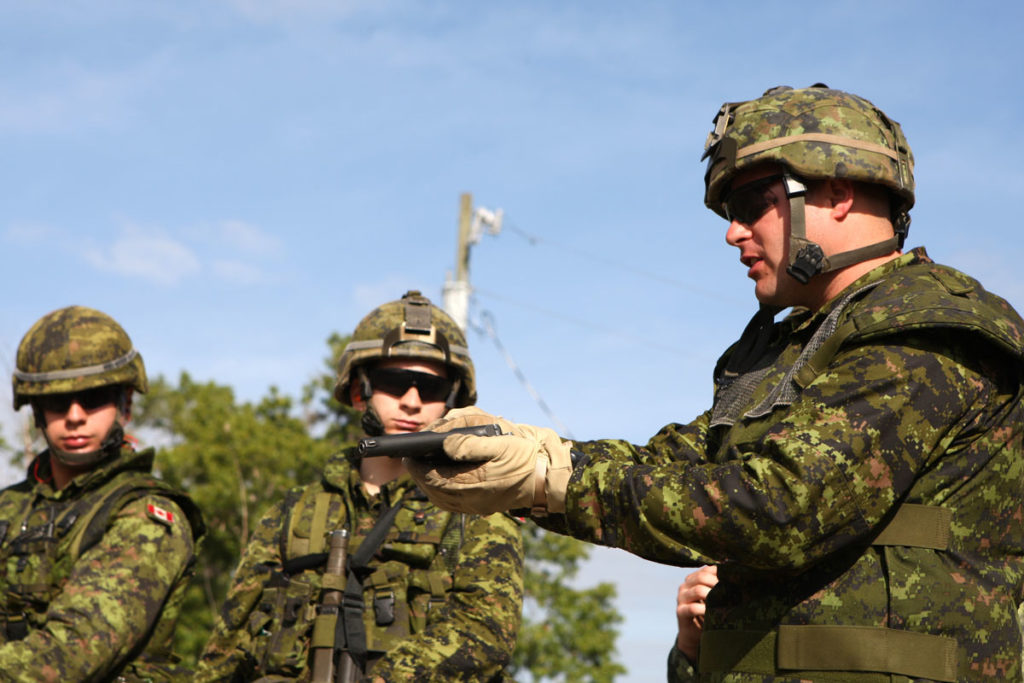 The Hi-Power was the most common handgun used by NATO countries. Here it is shown in Canadian service. On a relatively recent trip to Israel, I encountered a surprising number of Hi-Power pistols in service even today.

The Hi-Power was ultimately adopted as the standard service pistol by more than fifty armies. It has seen widespread service among military and Law Enforcement agencies in ninety-three nations. Mehmet Ali Agca used a Hi-Power when he attempted to assassinate Pope John Paul II in 1981. Saddam Hussein was an unapologetic proponent of the gun. At the time of his gory death, Muammar Gaddafi was in possession of a gold-plated Hi Power that sported his own likeness on the grips.

As an aside, at the apogee of his greatness, Gaddafi was the 8th richest person in all of human history. When he met his demise he was dragged out of a drainage culvert and shot down like a dog. That just goes to show that one should not aspire to become a despotic dictator solely for the retirement plan.

The Hi-Power was one of the most advanced combat pistols in the world during WW2, and it was not inconceivable that troops on both sides of the line could have faced each other wielding identical weapons. The product of two of the greatest gun designers who ever lived, the Hi-Power influenced the design in one way or another of literally every combat pistol subsequently developed. Inspired, respected, and effective, the Hi-Power is one of the most enduring small arms designs of the war.