S&W’s 686 PC is a competition-class thoroughbred for discerning wheelgun addicts. And it’s an L-Frame as opposed to the blued K-Frame M19. Roy’s is the 4" six-shot version.

In 1955, Smith & Wesson introduced the .357 Combat Magnum which would become the Model 19 two years later when the company went to a model-numbering system. It was offered on the .38 Special M&P K-Frame instead of the standard .357 Magnum N-Frame. This resulted in a weight reduction of approximately 1/2 lb. This, coupled with the smaller cylinder, made the Combat Magnum very desirable to those who carried a sixgun all day.

This medium-framed magnum concept came about at the prompting of double-action legend Bill Jordan, who envisioned it as a sixgun to be shot mostly with .38 Specials and loaded with .357 Magnums while “on duty.” But over the years .357 ammo changed, with more and more shooters going to 110- and 125-grain fast steppin’ loads which soon took their toll on the thin forcing cone of the M19. Because of this, the M19 was replaced with the L-Frame Model 586 with a larger cylinder and forcing cone diameter while still maintaining the M19 grip frame (see sidebar for Roy’s adventures with the L-Frame).

For added strength for those magnums, it features a ball-detent locking point

My original M19 has been in use for well over 50 years with nary a problem, however most of my loads have been with cast bullets. In 1967 S&W made two significant changes to the M19/Combat Magnum. They round butted the grip frame and cut the barrel lengths to 2-1/2" making it much easier to conceal. The first report I saw of this sixgun was by Skeeter Skelton. He said “I like it.”

It took 20 years but our patience has finally paid off; the M19 Combat Magnum is back. The original was available in Bright Blue or nickel. Although the original guns from 1955 to 1957 were cataloged as Combat Magnums they were not marked as such. This resurrected version is the M19 Classic and has a Bright Blue finish representative of the original, but it differs in that it is marked on the left side of the barrel “Combat Magnum” and the barrel length is 4.25" instead of 4" as on the original. The official model number is 19-9 — meaning there have been nine changes since the M19 arrived nearly 65 years ago.

Except for the relatively unnoticed increase in barrel length and the 21st Century internal changes common to all S&W sixguns, this latest version looks much like the original. One difference not immediately noticeable is the fact the grip frame is round butted and the grips themselves are of the round-butt to square-butt configuration.

Sights are excellent consisting of a fully adjustable black rear sight mated up with a red ramp front sight. Cylinder and frame are both carbon steel while the barrel is stainless steel. Weight is just over 37 oz.

My most used .357 Magnum load is the Black Hills 125-gr. JHP. It’s my turkey hunting load, and with an accurate sixgun it’s no problem to take the head off a turkey with it. In the newest M19 it clocks 1,350 fps and groups 1-3/8″. A most interesting alternative is the Buffalo Bore .38 Special 150-gr. Hard Cast Wadcutter. At 935 fps (plus excellent accuracy) it makes a very good “anti-personnel” load.

I’ve been shooting M19s since the early 1960s. This latest version does not have as smooth an action as my original, however, it’s stronger and shoots better and is most assuredly more comfortable — so much so in fact I don’t have to mostly shoot .38 Specials — .357s will get the nod most of the time. I don’t question the sixgun standing up to heavy doses of them. 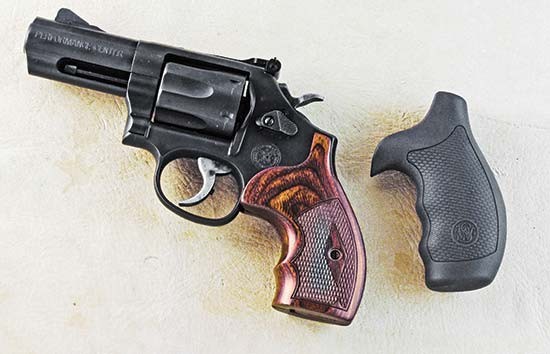 Another new model is the Performance Center M19-9 with a 3″ barrel. The Carry Comp is designed for CCW. Now snub-nosed .357s are notoriously hard kickin’ when it comes to felt recoil. Because of this I started my test-firing with a lot of .38 Special loads and found it felt more like shooting a .22. When I switched to .357s I expected to pay the price, however, I found the felt recoil was more like a .38 Special. There are always trade-offs in life and the trade-off here is the reduction in recoil goes along with an increase in noise. Shooting .357s with jacketed bullets is always a noisy proposition, but in this case is even more so because of the PowerPort vented barrel. This consists of one large port in front of the front sight and it really does its job recoil-wise. I’ll happily accept the increased noise for the decreased upflip.

The sights on the Carry Comp consist of a fully adjustable rear sight matched up with a tritium front night sight. Two sets of grips are included — one is custom wood with checkering and finger grooves designed for concealed carry with an open back strap and fitted flush with the bottom of the butt.

The second set — which I used for extended sessions — is a synthetic rubber boot grip with finger grooves. It covers the back strap and also extends below the butt. These also help keep felt recoil at a minimum.

The cylinder, frame and barrel shroud are carbon steel while the barrel itself is stainless. Weight is just over 34 oz. and the MSRP is $1,092.

This is some little snubbie. Accurate and easier to shoot than a J-Frame and darn near as easy to pack!

John even tried some Black Hills .357 158-gr. stuff in the Carry Comp and found the results to be impressive. The port cut in the top of the barrel right in front of the Trijicon Night Sight may have helped some!Photo: John Taffin

Let’s Up The Ante To L

Like most of you, I’m a die-hard revolver-guy. At an S&W unveiling late last year, they showed off the 4″ 6-shot model of their new Performance Center 686 (along with the 7-shot “Plus” Model with a 5″ barrel — cut for moon clips). Being a semi-old guy with a big gray mustache, I sorta’ stood out from most of the fit, muscled young writers and bloggers in attendance. During test firing, I noticed the revolvers were gathering dust as the string of fancy-new autos got worked out hard.

So I spent some quality wheelgun time and soon found a few of the younger fellows watching. They eventually asked me questions like “How do you shoot a revolver like that?” — since I was actually hitting the targets. I explained to a couple of them about staging triggers and shooting only DA and stuff like that. They nodded. Then they went back to autos.

After the dust settled from an informal shoot-off they had among us, I found I was first, and Mike Humphries, Executive Editor at American Handgunner, was second. Suddenly we got stared at. But I know why we did well. We cleaned the plate racks with the revolvers, while most of the younger guys had to slow way down, still leaving lots of plates standing. All of which shows wheelguns are still fighting tools, as well as great fun in competition — even rock-solid for home defense too. And these new Performance Center L-Frames are at the top of all those categories.

Not long ago it used to be that in order to get the sorts of features on this 686 duo you had to spend big bucks on custom mods to an already pricy base gun. Our test gun had the Performance Center over-sized cylinder release, orange front sight (you can swap it out), tuned action, unfluted cylinder, vent-rib barrel, hard chrome trigger with stop and a custom teardrop-shaped hammer spur on the hard chrome hammer. I found through use, the teardrop shape is there, I think, to offer clearance for the over-sized release.

The smooth trigger is somewhere between a standard and a classic target trigger in width. “Just right” comes to mind. Grips are Hogue-style (might even be made by them, I’m not sure). The cylinder has a conventional lock-up, with a detent for the front of the ejector rod and the standard rear-locking pin protruding from the ejector star into the recoil shield. Timing was spot-on, and the action smoother than most standard production revolvers of the brand. I’m a picky guy and I think a touch of the hands of an S&W action master could turn this into a spectacular action easily and without much work at all. For most shooters, I think it would be fine and would shoot-in soon. 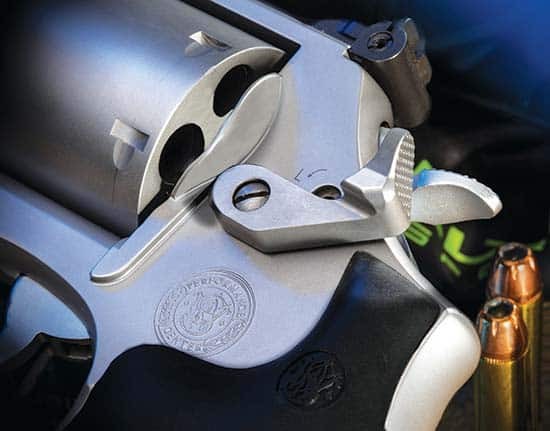 At an affordable $966 MSRP for either model, you essentially get competition-ready guns right out of the box. The bright front sight, all-steel construction, fast cylinder release, slight muzzle-heaviness and great actions make these contenders for the weekend competition warrior. And — as skills progress — lend themselves to more custom touches like enhanced actions, different sights, grips and more. There’s also a wide-range of holsters in both leather and synthetics fitting the L-Frame models.

Shooting the test 4″ Model, I found it to be typical S&W. What I mean is, it loved .38 target wadcutters. At my backyard range shooting off the porch, it was pretty easy to hold 1.75″ groups. Everything worked fine and there were no misfires, showing the action was light, but still reliable. The over-travel stop was set perfectly.

These are both burly, stout guns easily able to handle full-power .357 Magnum loads and I fired a few for fun. No issues at all, and the weight and good grips made it actually enjoyable. Either of these guns could double as a hunting revolver. The oversized cylinder release is easy to find and sure under your thumb, the ejector works perfectly allowing full-length case ejection and that bright orange front sight jumps right out. You could also mount a dot sight or scope on one using various after-market mounting systems and have a good field gun.

The new Performance Center 686 models are handsome, well-conceived, solidly made and work as-advertised. What’s not to like there?